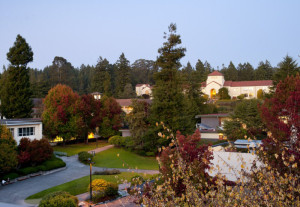 For a tour of HSU in photos, click here.

Humboldt State University, the northernmost campus in the California State University system, which overlooks Humboldt Bay, is surrounded by an amazing natural environment of redwood forests, pristine coastline and wild rivers.  Located in the progressive city of Arcata, 270 miles north of San Francisco, HSU students live and learn in a setting that is free of smog, traffic jams, and overcrowding.

HSU boasts 51 majors and 69 minors as well as numerous graduate, credential, and certificate programs.  Most class sizes are small; typical undergraduate class size is 29 students, with a student-faculty ratio of 23:1, for the 8000 enrolled.  At HSU, students have an opportunity to build one-on-one relationships with their professors, who are some of the leading educators and researchers in their fields, and with their guidance, can experience hands-on learning, develop critical thinking skills, and cultivate a passion for knowledge.  HSU students are part of a close-knit campus community that cares about their success, and which is committed to social justice, sustainability, and to protection of the environment.

In addition to being leaders in the sciences and humanities, HSU professors are committed to mentoring their students by including them in experiments, lab research, and field work.  At Humboldt State, learning isn’t limited to sitting in a classroom and taking notes. HSU students take what they’ve learned and apply it in the real world by doing their own lab work, seismic readings, photography, wildlife studies, research, social work, and more.

According to HSU President Dr. Lisa Rossbacher, “Students at HSU benefit from great academic programs, a broad range of co-curricular activities, the sense of exploration (both intellectual and environmental), and the connections that they build with friends, faculty and staff, and the community.  The University is nationally recognized for its graduates’ contributions to creating a better world.”

HSU opened as Humboldt State Normal School on April 6, 1914 with 55 students training to be teachers, housed in a cabin-like building on 11th and M Streets in Arcata, California.  The first graduating class, comprised of 15 female students, received their degrees on May 26, 1915.  Founders Hall construction began in 1922.  The name was changed to Humboldt State College in 1935, and to Humboldt State University in 1974. Between the 1950s to early 1970s, the campus population grew to more than 6000.  By 2011, the main Humboldt campus covered 144 acres, and multiple off-campus facilities included a marine lab, ocean-going research vessel, aquatics center, astronomy observatory, natural history museum, Third Street Art Gallery in Old Town Eureka, Wildlife Care Facility, 11,500- square-foot greenhouse, and demonstration tree forest.  Presently, about 8000 students study with over 500 instructors.

The faculty at HSU has a strong commitment to fostering students’ inherent potential, working with them on research and scholarship. They guide, motivate, and inspire, students, to bring out their best.

Alumni believe that HSU prides itself on the applied nature of its academic programs. A 2009 survey of HSU Alumni indicated that three quarters of alumni claimed that attending HSU was a great decision, a vast majority agreed their education prepared them well for life-long learning, and they praised the campus for its quality academics and valuable relationships.  Former students talked about the importance of personal connections with faculty, hands-on learning opportunities, and the strong sense of community at their alma mater.